One Bedroom vs Two Bedroom Condos in Ottawa
by Dave Williams

An investor wonders how do One bedroom and Two bedroom condos measure up, so we took a look. 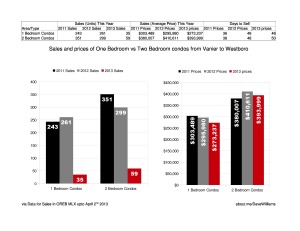 One bedroom condos sales have been increasing in numbers (up 9% when comparing 2011 and 2012) while decreasing in average price (down 2.5%) over the last few years, which could be due to a supply of cheaper condos hitting the market.

What I really found telling is the current inventory, 163 singles and 227 doubles currently for sale in those areas which represents 62% and 76% of 2012’s sales respectively.  There are so many for sale that buyers really have their choice.  This makes it a great time for buy & hold investors as the prices are being driven down because of inventory.

Find out how housing prices are doing in your neighbourhood.