Last week we were relieved to see an increase in Ottawa’s real estate market, a substantial increase when compared with a cold March, and a tiny increase when compared to April 2012.  Today we’ll start breaking the market apart into it’s components by taking a look  at residential homes sales & prices in April of 2013. 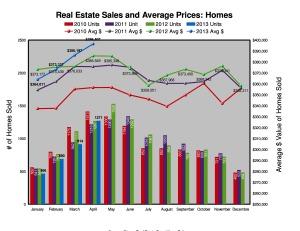 Bungalows saw a higher than average increase with bungalow prices increasing by 3.8% of 2 Story homes which only increase 2.4%
Residential Home Sales 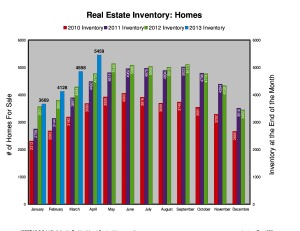 The big movers in the residential segment were 3 Story homes, with 69 selling this year compared with 56 in April 2012.  Also, notable is that Bungalow sales dropped to 269 this year compared to 290 last year, which may have contributed to the increase in price.  When a style of home is in demand the premium people are willing to pay for it increase.

Residential Inventory of Homes for Sale

Imagine this in Olly Williams’ voice from Family Guy: “Who wants to buy a house, we got lots!”

Have a Great Day, next week in this segment we’ll take a closer look at condo properties.