Report on resale Condos in Ottawa
by Dave Williams

In the tale of two real estate markets, that is Ottawa, the condo market is the tale of incredulity, the market that was going directly the other way.

In April,  we saw a 0% growth in the condo market in terms of sales and a 2.26% drop in the average price of condos.  While the number of resales has been declining over the last 4 years the New Starts in the condo segment have grown, by 25% from 2011 to 2012, and if you take a gander at this chart to the left you can see that Semis, Rows & Apartment starts have been steadily taking a higher percentage of the pie.

This is the new reality of Ottawa’s condo market.

And this new reality is taking it’s toll on the resale market as we can see from the growing inventory of condos for sale.  In April 2013 759 condos were listed 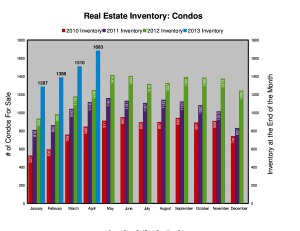 What does this all mean?  Well the good news for buyers is there is a lot of choice and some great opportunities to get good deals on some condos.  The bad news is for the sellers, though the market is considered stable (nearly 40% of listed condos sold in April) there is a LOT OF COMPETITION, so in order to sell your condo, it really has to stand out.