55 Sales a Day for the Month of May; a Prediction for Ottawa’s Real Estate Market
by Dave Williams

Here we are winding down May 2013, and from our perspective the month has been a flurry or real estate activity.  We’ve listed 12 homes for sale in Ottawa, and written contracts on 13 homes.  So on the heels of a terrible start to the year, where will we be come the end of the month. 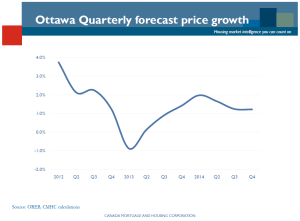 Taking a look at the first four months of 2013, we are at about 92% of 2012 sales in the same time period, 4256 sales this year vs. 4646 in 2012.   It looks grim, but this was fully expected with CMHC forecasting a drop back in November followed by a correction through the remainder of the year. So my prediction is a slight overall drop landing us at 97.2% of last years sales, or about 13900 by the end of the year.

A 5 year average on monthly sales in Ottawa

As a test of my predictions, I took a look at the sales numbers (unverified) as of today, May 27th.  There are 1496 recorded sales and conditional sales for this month, or about 55 a day for the month of May.  If the same trend continued we would end the month at 1773, 1418 homes sold and 355 condos sold.

OREB will release their press release on June 5th, 2013 so until then your guess is a good as mine.

Where do you think Ottawa’s Real Estate Market will land this year?

One response to “55 Sales a Day for the Month of May; a Prediction for Ottawa’s Real Estate Market”