The Best Half of Condo Sales are Missing
by Dave Williams
I’ve mentioned before that I have a theory on why condo prices in Ottawa seem to be dropping so rapidly, but when I looked at the Ottawa real estate statistics for this month and saw that the average price of condos sold was at a 4 year low I had to dig deeper. 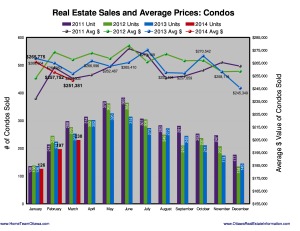 The average price statistic the board reports each month is the total dollar volume of sold condos, divide by the number of condos sold.  Which means that a large number of high, or low sales can swing the average price in one direction or another.  This is the reason OREB always *’s this statistic with the warning that it does not affect the direct value of individual properties but works to judge the health of the market as a whole.
But WHAT IF a large number of higher priced condo sales were left out?  The average price would lower, right.
Although some new condo constructions do end up on the MLS® system, typically after they are 75% sold out and move to the construction phase, a large number of new condo sales do not get reported in the Ottawa Real Estate Board’s (OREB) statistics.
It’s no surprise to anyone familiar with the Ottawa condo market that we have an abundance of condo projects underway.  Thanks to Canadian Mortgage and Housing Corporation’s (CMHC) Housing Now report for March 2014, I can confirm there are 3,153 condo apartments under construction in Ottawa as of the end of February.
3100!  By comparison there were nearly 2900 condo re-sales in all of 2013 reported by OREB.
That means there are more than a FULL YEAR worth of condo sales under construction right now. Ok, so most condos projects are in operating in a 2 to 3 building cycle, so these 3100 condos will probably be completed and absorbed over the next 3 years, but even then we’re adding a full third to the potential sales numbers.
Let’s look at February as an example.  The CMHC Housing Now report shows 383 absorbed condos, which is occupied/taken ownership.  In contrast there were 197 condo re-sales in the same month reported by OREB.  This is staggering, nearly double and 139% higher than new condos absorbed in Feb 2012, so arguably we are entering the height of condo occupation season as condo construction is slowing down while waiting for the excess inventory to get absorbed.
So here’s a thought exercise;
What do you think?  Do you agree that many of the new condo sales are attracting the higher dollar value or is there something I overlooked?