Ottawa condo prices just went through the roof, what happened? 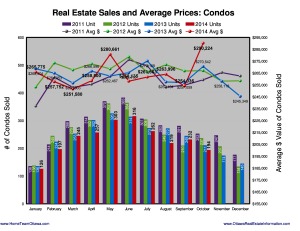 That was the start to our year for the condo market in Ottawa.  Then in May the sky’s brightened, the sun shone through the clouds and the average price of condos sold jumped up to 6.9% over May 2013.  Can you say rebound!

In June and July we dropped back to our 4 year lows, though I do have some idea’s of why the condo market seems depressed in Ottawa.  August showed some improvement, beating out 2011 & 13 to show an 2.7% improvement year over year but not quite reaching the highs of 2012.  September was the same story we’ve heard all year and then…

So we had to ask, what happened.  As it turns out 6 condos were considered sold  in the month of October 2014 between $1.2M and $1.7M, (and only 1 made the most expensive condos sales of Ottawa list.)  These 6 condos, all in one complex at 174 Glebe Avenue in The Glebe have been pending sales since May, and now that the builder has a delivery date got posted to the system.

So this is not the “recovery” we were hoping for in the Ottawa condo market, but as I’ve pointed out in other blogs the condo market is not nearly depressed as the resale statistics make it out to be.  Next month I’m sure we’ll be back to reporting pre 2011 average prices.  If you’re curious how this affects the value of your condo, we’d love to share with you the 3 changes that can add %10 to your selling price and the marketing strategies that ensure condos sell, even in this market.

Hope this helps you understand real estate a little better.
As always if you have any real estate questions ask them below, or contact us directly at 613-788-2113