The Ottawa Real Estate Market is balanced and still strong.

In the early days of the 2000’s, coming off a long buyers market, marked with uncertainty in employment and high interest rates the surge of the market as it shifted back into a sellers market (the normal ebb and flow of real estate markets) the last 10 years appeared to be the hay day of real estate.

The Market has Stabilized

Take a look at home prices over the last 55 years, the grey line represents the compound growth that brings us from 1958 to 2013*.  (*at the time of this blog post the Ottawa Real estate Board had not released the final 2014 numbers yet.) 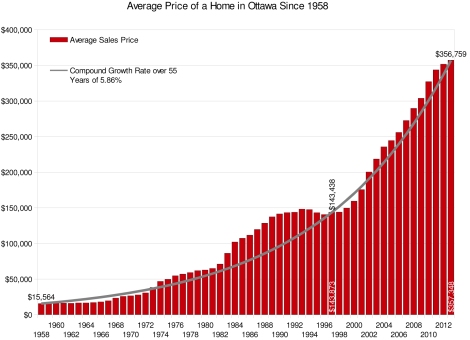 You can see that when ever the average price of a home in Ottawa dips below, or above the growth line it slows and then returns towards the norm.

In the 1990’s, just after a boom in house prices and sales (following a big slow down in the 80’s) you can see the prices corrected and then dipped back down toward the end of the decade before starting to rise again.

This is the trend people refer to when the predict the market is going to crash again, the bubble will burst, but interest rates have become much more stabilized, statistical prediction methods much more sophisticated and the governments control of the risk in the housing market much more sticks.

Changes to the mortgage lending rules in 2010 & 12 helped slow the growth to a much more stable pace.  Take a look at this chart below of the prices in Ottawa’s housing market since 1997. 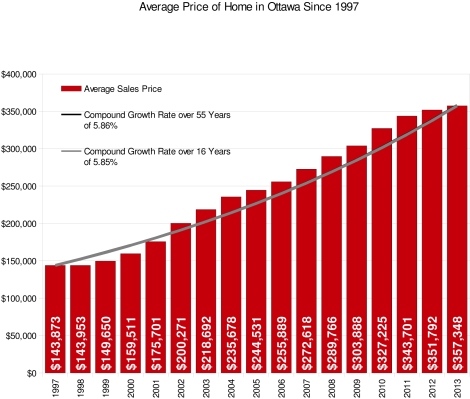 You can see the growth lines for the 55 year trend and 16 year trend have aligned and the peaks and valleys are much less pronounced.

In addition, these stats released by the Ottawa Real Estate Board only account for resale properties.  While we estimate the total home sales by REALTORS® in Ottawa to come in around 13,900 for 2014*, there were an additional 5,400 (approx) new home sales in Ottawa in 2014, and increase of 23% over 2013.

With close to 35% of home sales in Ottawa not attributed in these numbers the picture of Ottawa’s Real Estate market is incomplete and may seem depressed.

I predict 2015 will be a balanced market in Ottawa real estate, a year of stable but realistic price growth, with lots of choice in homes and condos.  It will be marked by negative media attention as it doesn’t break new records, a higher than normal inventory of homes for sale where the best staged, marketed and priced homes will sell, and a year of slow price growth allowing more first time home buyers to catch up to the market.

You can keep up to date on Ottawa’s Real Estate Trends on our website or find out what your home is worth.
Hope this helps you understand real estate a little better.
As always if you have any real estate questions ask them below, or contact us directly at 613-788-2113